Get Ready for Children In Need

BBC Children in Need returns Today, at 7.00pm on BBC One, with a variety of entertainment acts all doing their bit to raise money for disadvantaged children and young people across the UK.

Sir Terry Wogan is joined by Tess Daly and Alesha Dixon for a spectacular night of fun and fundraising.


Originally the first scene of the next Doctor Who Christmas special, The End of Time was to be shown which was said to be 3 minutes of the Doctor arriving on the Ood sphere but it seems Russell T Davies decided that it gave too much away. It now seems to be the first couple of scenes from directly after the opening titles.

The scene is due to be shown between 8.00pm and 8.30 pm but anything can happen on the night. 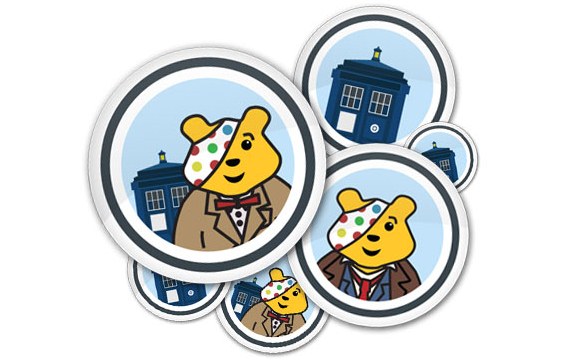 Our unofficial “WhoBears” can be seen Here

The seven-hour show will come live from BBC Television Centre and will feature some of the UK’s top TV, musical and theatrical personalities and acts.

Alesha and the stars of Strictly Come Dancing get the party started with a dazzling show-opener. The magic is back as Merlin conjures up some wizard ideas for this year’s appeal, and get ready for a world exclusive as the official Children in Need single is launched.

A very important patient checks into Holby General, raising the temperature for the cast of Casualty, while Britain’s favourite boy band JLS get pulses racing with a special live performance. Plus, watch out for a unique bite-sized episode of Walk on the Wild Side.

The stars of Hollyoaks rock TV Centre with their tribute to Queen, there is an exclusive sneak-peek of the Doctor Who Christmas special, and music from American superstar Taylor Swift.

The One Show team roll on their leg-warmers to re-enact the iconic street dance from Fame, the stars of Dragons Den roll up their sleeves to restore an activity centre for disadvantaged children and the four balladeers, Westlife, are live in the studio.

Sir Terry Wogan causes a stir when he turns up as the new squire in Lark Rise to Candleford, Sun Hill songsters The Bill perform a Rat Pack classic, and Gary Barlow, who rocked the Royal Albert Hall in aid of Children in Need, is sure to raise the roof and the total when he brings on the big cheque.

The cast of EastEnders celebrate the Magic of Motown in Albert Square, and the BBC Newsreaders are joined by surprise guests to create a headline-grabbing music and dance spectacular.

The Original press release can be seen Here