Doctor Who Classic Touches Down on Boxing Day

Doctor Who fans across the land get ready to clear their schedules as the biggest Doctor Who Classic collection ever streamed in the UK launches on BritBox from Boxing Day.

From 26th December, 627 pieces of Doctor Who Classic content will be available on theservice. This tally is comprised of a mix of episodes, spin-offs, documentaries, telesnaps and more and includes many rarely-seen treasures. Subscribers will be able to access this content via web, mobile, tablet, connected TVs and Chromecast.

129 complete stories, which totals 558 episodes spanning the first eight Doctors from William Hartnell to Paul McGann, form the backbone of the collection.

The collection also includes four complete stories; The Tenth Planet, The Moonbase, The Ice Warriors and The Invasion, which feature a combination of original content and animation and total 22 episodes. An unaired story entitled Shada which was originally presented as six episodes (but has been uploaded as a 130 minute special), brings this total to 28.

A further two complete, solely animated stories The Power Of The Daleks and The Macra Terror (presented in HD) – add 10 episodes.

Five orphaned episodes – The Crusade (2 parts), Galaxy 4, The Space Pirates and The Celestial Toymaker – bring the total up to 600. 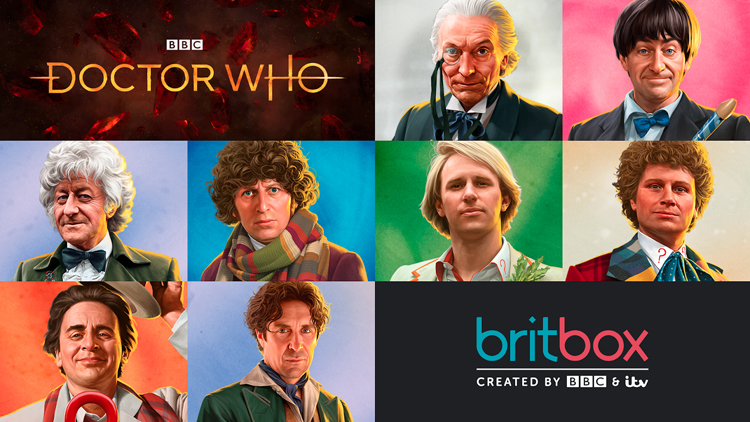 Doctor Who: The Movie, An Unearthly Child: The Pilot Episode and An Adventure In Space And Time will also be available on the service, in addition to The Underwater Menace, The Wheel In Space and
The Web Of Fear which have been completed via telesnaps.

Spin-off drama K-9 And Company, and documentaries More Than 30 Years In The TARDIS and Doctor Who: Doctors Revisited complete the collection.

If watched back-to-back without stopping to eat, drink or sleep it would take a committed viewer around 272 hours or over 11 days to watch everything assuming no access to a TARDIS.

BritBox will also be curating special Doctor Who Classic collections, including ‘New
to Who’, featuring one key episode from each of the first seven Doctors as an introduction to the uninitiated. Further collections will be devoted to the most memorable monsters, with Cybermen, Daleks, The Master and Sontaran each getting the limelight. Regeneration episodes have also been collated.

Boxing Day also marks the start of a longer term collaboration with the BBC, with a shared vision of making BritBox the ultimate home of Doctor Who Classic content in 2020 and beyond, and ensuring the widest collection of content available is presented in the best possible format and quality.

Reemah Sakaan, Group Director ITV SVOD, commented: “BritBox becoming the first complete digital home of Doctor Who Classic creates a special opportunity for fans and streamers across the UK. We are looking forward to expanding the collection even further by working with the show creators to lovingly restore lost and previously unavailable episodes in the months to come and offering a truly exclusive experience.”

Sally de St Croix, Franchise Director for Doctor Who at BBC Studios added: “It’s thrilling to partner with BritBox and see all this amazing Doctor Who Classic content congregate in one place where subscribers canstream to their hearts’ content – some experiencing the show for the first time whilst others will simply be enjoying it all over again.”