In The Radio Times 5-11th December: exclusive preview of Doctor Who Christmas special and Russell T Davies reveals how David Tennant’s Doctor will be going out with a bang. 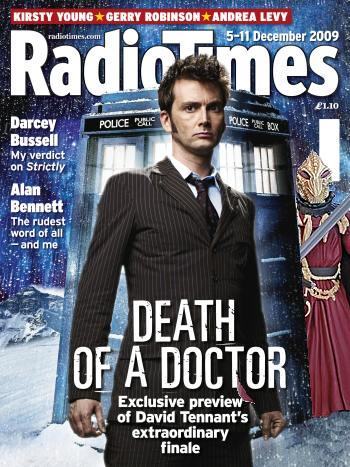 Plus, Russell T Davies reveals that the Master is back:

John Simm is back, as the Master, fellow Time Lord and the Doctor’s arch nemesis for nearly four decades. But Russel T Davies wasn’t daunted by the inconvenience of having killed off the Master in 2007 – this is sci-fi, after all: “It’s personal for the Doctor. The Master is his enemy, his opposite, and yet so tantalisingly close to being his soul mate. There’s something epic about their sheer existence – the last two survivors of an ancient race. It’s a clash of the titans. Both of them heading for death, and yet both determined to survive – at any cost!”

Digital Spy say the BBC have confirmed the scheduling…

David Tennant’s final two episodes of Doctor Who will air on Christmas Day and New Year’s Day, the BBC has confirmed.

Provisional schedules for the Christmas period will see ‘The End Of Time, Part One’ air from 7.30pm to 8.30pm on BBC One on Christmas Day, sandwiched between episodes of EastEnders.

‘The End Of Time, Part Two’, in which Tennant’s Doctor will regenerate into a new incarnation played by Matt Smith, will air on New Year’s Day. The hour-long episode will go out at 7.30pm, again sandwiched between episodes of EastEnders and also ahead of the last ever episode of Gavin & Stacey.

None of this has been confirmed by any press release via the BBC site.

In other news the BBFC website has confirmed the ruining times of the 2 Christmas specials with part one nearly one hour long and part 2 just under 73mins. They also reveal the titles for Doctor Who Confidential. You can see the information Here

The same site also confirms a series of Christmas Idents

Full information can be seen Here

Other magazines with Doctor Who Covers… 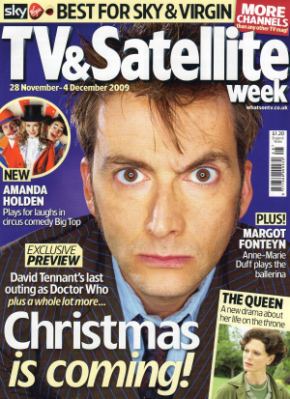 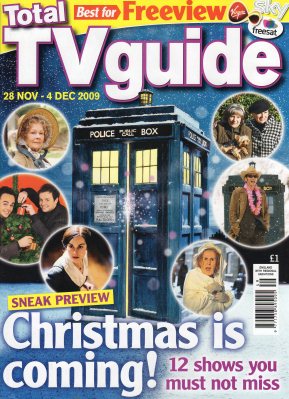