Radio Times starts its celebrations of 50 Years of Doctor Who with four free postcards of classic Doctor Who Radio Times covers with each issue – there are two sets of postcards to collect.

Also in this week’s Radio Times – Doctor Who, what’s coming up to celebrate 50th birthday

November 2013 marks 50 years of Doctor Who on TV, and RT will bring you all the news as it unfolds – starting with some of the treats coming up. The most hugely anticipated event is surely the Anniversary special on BBC1.

All details are firmly under wraps – and it doesn’t even start filming until spring, but fans worldwide are praying for a multi-Doctor escapade, perhaps with a few former best friends and best enemies thrown in. Could it actually happen? And would all the surviving actors be available – and willing – to appear in such a celebration? 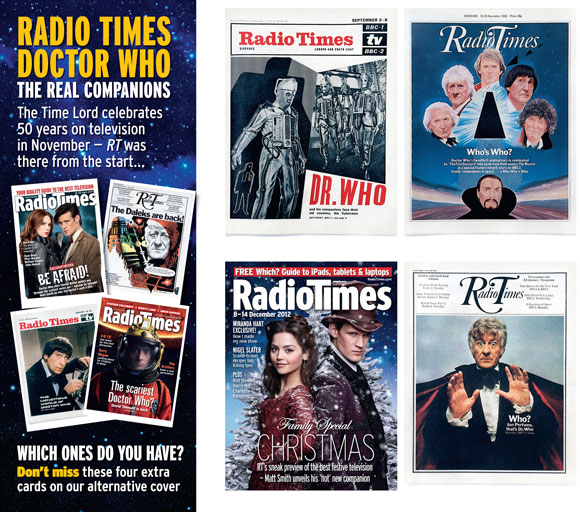 Tom Baker famously declined to participate in The Five Doctors in 1983, and the first three actors to play the Doctor are now long dead. But if William Hartnell can be recast (in The Five Doctors and now in An Adventure in Space and Time) is it conceivable that other actors might convince in Patrick Troughton and Jon Pertwee’s shadows?

This might all be pure fantasy, but what is known is that showrunner Steven Moffat has been toiling with the script. He tells Radio Times: “I’m mostly excited, a little bit nervous, and aware of trying not to let people down.”

An Adventure in Space and Time

Radio Times is chuffed that Mark Gatiss is calling his drama about Doctor Who’s birth An Adventure in Space and Time. This was the tagline RT printed on the billing for episode one in 1963 (below) and indeed on all 253 editions in the 60s.

For Gatiss, the 90-minute special (filming now and due to air in November on BBC2) is “quite simply a dream come true”. He describes it as “the story of how an unlikely set of brilliant people created a true television original”. David Bradley (Argus Filch in the Harry Potter films) is playing William Hartnell, the actor who was initially reluctant to take on the role of the mysterious time traveller. He soon fell in love with the character and was sad to leave in 1966. He died in 1975.

Bradley says when Gatiss offered him the part, “I almost bit his hand off.” Our first picture of Bradley in character shows him on the second day of shooting last week, with Lesley Manville as Hartnell’s devoted wife, Heather.

Call the Midwife star Jessica Raine has been cast as producer Verity Lambert (then just 27), while Brian Cox (the international film star, not the prof) is playing the “father” of Doctor Who, Sydney Newman, a flamboyant Canadian who was BBC head of drama.

The only surviving member of the quartet who created the series is Indian-born director Waris Hussein. He’s helped Gatiss with his “meticulous research” and is delighted to be a key character in the drama. “I am to be portrayed by my doppelganger, Sacha Dhawan, a handsome actor. Vanity prevails!” he jokes. Recently seen in Last Tango in Halifax, Dhawan was one of the original History Boys (in the play and movie).

Filming began on 3 February at BBC Television Centre, on what is likely to be the last drama made on the site before it’s redeveloped.

Executive producer Caroline Skinner tells RT: “As the BBC moves out of TV Centre, we are moving the cast and crew for An Adventure in Space and Time in! It’s a fantastic opportunity to film this momentous story in the actual location – a little bit of television history .”

In 2011, Radio Times archivist Ralph Montagu found two long-lost episodes of 1960s Doctor Who, including Galaxy 4: Air Lock (now being released on The Aztecs DVD on 11 March). However, 106 editions (including Marco Polo , the William Hartnell classic directed by Waris Hussein) are still missing from the BBC archive. For the anniversary, RT is running a campaign to find them. If you can help, email lostwho@radiotimes.com. Read the full story at radiotimes/lostwho

Plus an exclusive shot of David Bradley as William Hartnell on his second day of shooting, we also look ahead to plans for the 50th anniversary and to the new series at Easter.