From the official site www.doctorwho.tv

BBC Worldwide Australia & New Zealand and Vivid Sydney invite you to celebrate the 50th anniversary of Doctor Who for one night only!

The grand façade of the Customs House at Circular Quay will feature a visual feast of 3D-mapped projections of the Doctor and some of his greatest enemies, NSW Deputy Premier and Minister for Trade and Investment, Andrew Stoner, announced today. 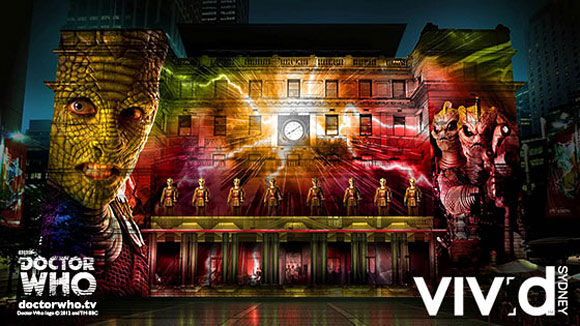 The spectacular celebration of Doctor Who will be staged for fans as part of Vivid Sydney, on Saturday, 1 June. The soundscape with the projections will feature music from the TV show including I am the Doctor and the iconic theme tune.

Developed, owned and managed by the NSW Government’s tourism and major events agency Destination NSW, Vivid Sydney is an 18-day festival of light, music and ideas. It is the biggest festival of its kind in the southern hemisphere and will take place in Sydney from 24 May to 10 June. 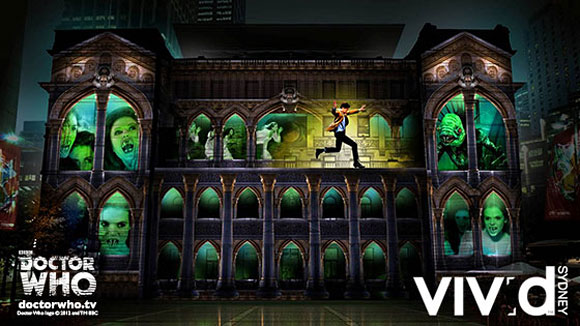 Destination NSW has collaborated with BBC Worldwide Australia and New Zealand to ensure local fans of Doctor Who can celebrate this major Anniversary through an evening of entertainment, featuring amazing light projections and a special cinema screening of two episodes from the series.

“This collaboration sees Australian creative innovators, The Spinifex Group, working with the Doctor Who team to create projections that will deliver a worldwide unique birthday celebration for the shows legion of fans, and our own Vivid Sydney is the perfect environment for this experience,” Mr Stoner said. 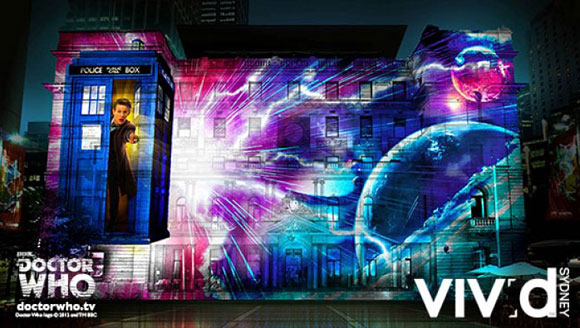 Doctor Who fans will also be able to take in a special cinema screening at nearby Dendy Opera Quays, featuring two thrilling episodes from Series Seven Part 1: Asylum of the Daleks and The Angels Take Manhattan which see the Doctor confront two of his most terrifying foes – the Daleks and the Weeping Angels – and say a heart-breaking farewell to his companions Amy and Rory Pond.

There will also be a competition allowing fans to submit a picture of themselves dressed as their favourite monster or Doctor at Vivid Sydney.

Leave a Reply to The Flying Shark Cancel reply