Karen Gillan to join the Official Doctor Who Convention

BBC Worldwide confirmed today that Karen Gillan will be joining her co-stars Matt Smith and Arthur Darvill at the Official Doctor Who Convention taking place on the 24th and 25th March at Cardiff’s Millennium Centre.

Karen Gillan said: “I’m really looking forward to the Convention and meeting all of the wonderful Doctor Who fans!”

The Convention brings the makers of the Doctor Who together for a full day, in-depth event designed to reveal the inner workings of the series. On the main stage live pyrotechnic demonstrations will thrill attendees, while in detailed prosthetics masterclasses fans will see a monster made flesh in front of their eyes. Throughout these sessions the secrets of their craft will be revealed by masters of the trade including Danny Hargreaves, Doctor Who’s SFX Supervisor and Neill Gorton co-director of Millennium FX, Europe’s leading supplier of cutting edge prosthetics, animatronics and special make-up FX.

Karen Gillan joins a full contingent of Doctor Who professionals ready to give fans an unrivalled glimpse into the behind-the-scenes world of Doctor Who. Everyone from the Production Designer Michael Pickwoad, responsible for Doctor Who’s eye-popping visuals to Casting Director Andy Pryor revealing what it takes to find a Doctor will be gathering in one place to celebrate the creativity (and elbow grease!) that goes into the series.

Tickets are on sale now, priced at £99 and available at www.dwconvention.com

ONLY available at the Official Convention is this Maxi Bust of Matt Smith’s Doctor clutching the only thing to keep the Dalek menace at bay – a jam & cream biscuit!

Comes complete with an exclusive ‘Dalek – To Victory’ art card.

This strictly limited edition item can only be purchased at the Convention – and must be pre-ordered for collection at the Forbidden Planet shop there. 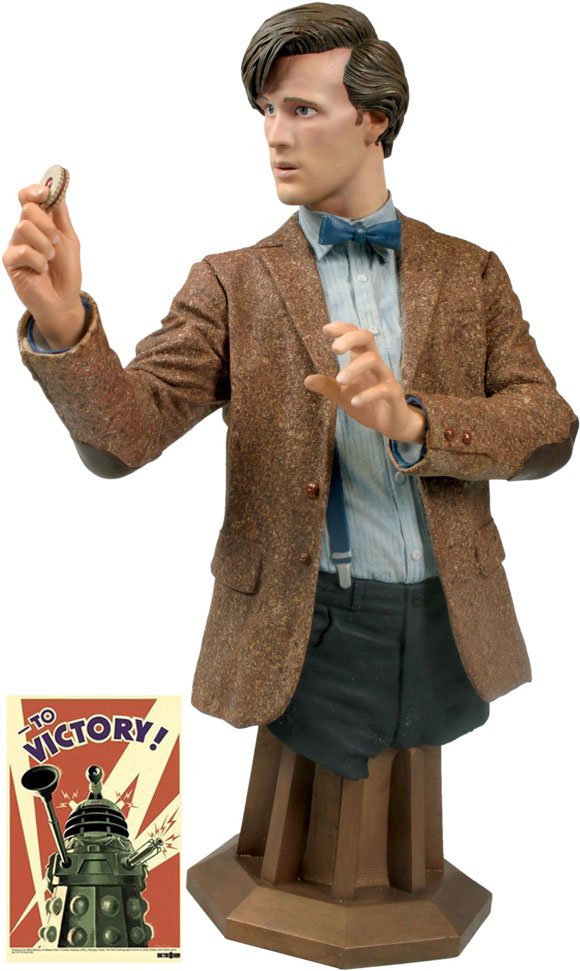 Give them your name, which day you are attending and the number of busts you wish to pre-order (Limited to two per customer)

Your order will be waiting for you when you visit the Forbidden Planet shop at the Millenium Centre!

Orders must be placed before midnight on Sunday 18th March.