Matt Smith (no not that one) Proposes at DWE

MATT SMITH PROPOSES TO GIRLFRIEND AT DOCTOR WHO EXPERIENCE

Matt Smith last night proposed to his long-standing girlfriend at the Doctor Who Experience in London. The marriage offer, which Matt had been planning for weeks (with some help from BBC Worldwide), came as a complete surprise to his girlfriend who was under the impression she was visiting the capital for a shopping trip.

The Doctor Who Experience at London’s Olympia, a walk through exhibition where the Doctor takes you on a spectacular adventure though time and space, has already been enjoyed by over 200,000 fans both young and old, and was chosen by Matt as the perfect setting for his proposal to girlfriend and avid Doctor Who fan, Stacie-Anne Dilkes, 23. The attraction is in the final three weeks of its year-long London run.

Matt, 22, from Rochford, Essex coincidentally shares the same name with the star of the globally successful BBC TV series and even chose to dress in a tweed jacket and bow tie for the occasion, the standard uniform of the Eleventh Timelord. He stunned his wife-to-be by pretending to be an exhibit in a section of the Experience which hosts original props, costumes and monsters from almost 50 years of the programme – before bending down on one knee and asking for her hand in marriage. And happily, she said YES!

Matt Smith, who plays the real Doctor, instead of protesting at this apparent, albeit brief identity theft, was also in on the surprise and sent a personal message of congratulations to the happy couple, commenting: “Matt Smith proposing to his girlfriend! Firstly, being a Smith means phone calls to the bank take so much longer – there are so many Smiths!! But I bet none of them have proposed at the Doctor Who Experience! Amy and Rory would be proud. Next – babies in the TARDIS…? Congratulations to you both and many years of happiness. Love, Matt.” 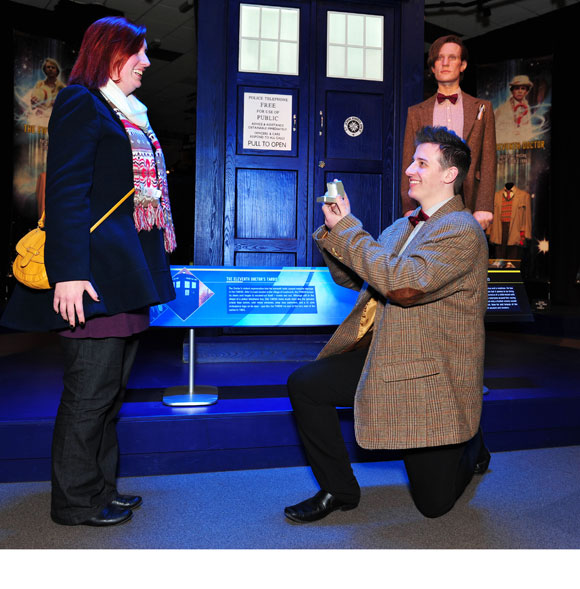 Leave a Reply to Bob the Dalek Cancel reply