A new Doctor, a new companion, a new era 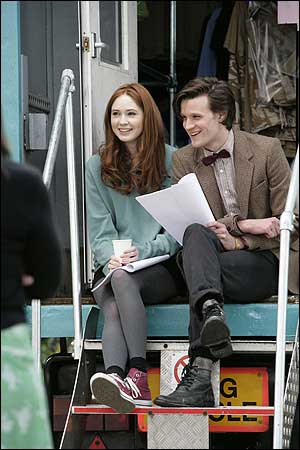 Production started today on the new series of Doctor Who in which BBC One viewers will meet the 11th Doctor and his companion for the very first time.

The latest incarnation of the iconic character is played by Matt Smith (Party Animals).

Upon arriving on set in Cardiff, for his first day of filming, Smith commented: “I feel very privileged and proud to be part of this iconic show.

“The scripts are brilliant and working alongside Karen, Steven and the rest of the crew is an inspiration because their work ethic and passion for the show is so admirable.

“I’m excited about the future and all the brilliant adventures I get to go on as the Doctor.”

Accompanying The Doctor on his further adventures in time is a new companion, Amy Pond, played by Scottish actress Karen Gillan (The Kevin Bishop Show), who will first meet The Doctor in episode one of the new series.

New show-runner and long-running Doctor Who fan Steven Moffat has developed this series and, as Lead Writer and Executive Producer, will be responsible for the overall creative direction of the show, as well as plot and character arcs.

Moffat’s previous episodes of Doctor Who, including the BAFTA-winning episode Blink, have garnered widespread acclaim from critics and fans alike.

He commented: “And here it is, the big moment the new Doctor, and his new best friend.

“And here’s me, with the job I wanted since I was seven. 40 years to here! If I could go back in time and tell that little boy that one day all this would happen, he’d scream, call for his mum, and I’d be talking to you now from a prison cell in 1969. So probably best not then.

“Matt and Karen are going to be incredible, and Doctor Who is going to come alive on Saturday nights in a whole new way and best of all, somewhere out there, a seven-year-old is going to see them, fall in love, and start making a 40-year plan…”

Piers Wenger, Executive Producer and Head of Drama, BBC Wales, added: “The scripts for the new series are every bit as funny, thrilling, scary and imaginative as you’d expect from the man who brought us The Empty Child and Blink.

“There’s a strange and perfect alchemy between Steven and Matt Smith and the next few months are going to be riveting as that relationship starts to emerge on screen.

“Steven always says he’s been waiting to do this job since he was seven. But it’s actually the Doctor who has been waiting for him.”

Ben Stephenson, Controller, BBC Drama Commissioning, says: “I am thrilled that a whole new generation of children will forever say that their Doctor was the wonderful Matt Smith.”

The series was co-commissioned by Ben Stephenson and Jay Hunt, Controller, BBC One, and will be produced by Tracie Simpson (Doctor Who) and Peter Bennett (Torchwood).

Filming is taking place in Cardiff until March 2010. Thirteen x 45-minute drama produced by BBC Wales for BBC One.