The title of the next Adventure Game has been confirmed as TARDIS and it’s released on Friday, 27 August.

It will feature monsters, terrifying new dangers for the Doctor and Amy and offers an amazing insight into the world’s most famous blue box. It’s also been announced that the game will give players the opportunity to pilot the Doctor’s iconic time machine. 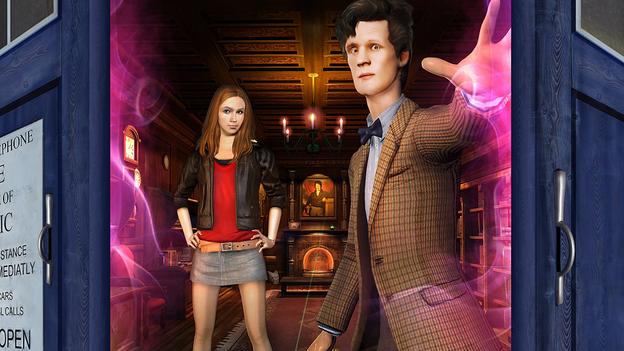 Lead Writer and Executive Producer, Steven Moffat, confirmed, ‘Since 1963, kids have wondered what it would be like to control the TARDIS. Now we’re handing complete control of the most powerful ship in all of space and time to a generation of children. Everybody duck!’ He also told us, ‘TARDIS is a brilliant, brilliant adventure. It’s funny, touching, terrifying, amazing – everything a Doctor Who episode should be.’

The official press release promised, ‘the game allows players to explore the Doctor’s wondrous drawing room, featuring treasures and artefacts from his many adventures – a location specially created for the game, which will go on to form part of the Doctor Who canon’.

Matt Smith and Karen Gillan return as the Doctor and Amy and once again the game is executive produced by Steven Moffat, Piers Wenger, Beth Willis and Anwen Aspden (BBC Wales Interactive), alongside Charles Cecil. Music is by Murray Gold and TARDIS is written by James Moran whose previous credits include Torchwood, Spooks and the Tenth Doctor story, The Fires of Pompeii.

It’s the third Adventure Game and will be available at no extra cost to UK households, simultaneously on PC and Mac from this site. Users outside the UK will be able to purchase and download it on its UK release date, 27 August.