“It’s hard to imagine when Doctor Who wasn’t a Saturday-night fixture. But back in 2005, the idea of resurrecting a defunct sci-fi drama, some 16 years after the series had limped off our screens, was a serious gamble.

It had become a byword for wobbly sets and dodgy monsters.

But Radio Times sniffed the air and put faith in the inspirational leadership of Russell T Davies, the new Doctor Who supremo. 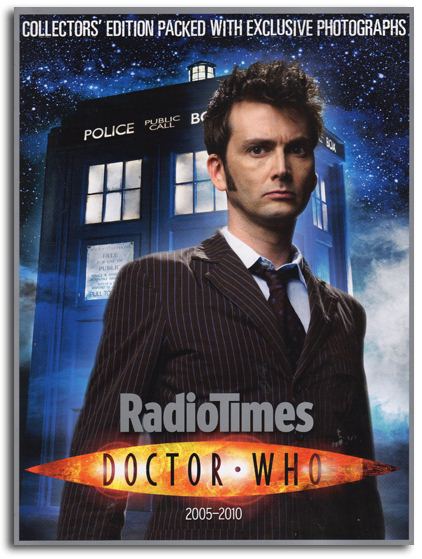 This 164-page special is a testament to that wise decision to get right behind the regenerated series. I do hope you enjoy our fabulous coverage of the wonderful cast, creatures and the incomparable David Tennant who all made Saturday nights special again.”
Ben Preston, Editor Radio Times

Back in December The Radio Times announced a Doctor Who souvenir book. For those of you who have already ordered this you are in for a treat, for those who haven’t we can thoroughly recommend it…

This is much more than a book just full of pictures (although there are plenty of them). Each Radio Times cover, starting with “Rose” from 2005 right up to David Tennants last cover, “Death of a Doctor” is represented with a high quality glossy original image. There is also a forward by Russell T Davies and a short synopsis for every episode from each series along various quotes from the Main Actors, quest stars and production crew.

“we were effectively space police, but we’re heavy -duty. It was fun stomping down corridors with people being terrified”
Ken Hosking, Judoon Actor

It then goes on with in-depth features and pictures from behind the scenes such as the Tardis Construction, special effects and in particular many fascinating articles and images on prosthetics and make up.

“It’s quite frightening coming into Who- like running alongside a speeding train”
Christopher Ryan, General Stall

The quality and wealth of pictures is superb with many full page and previously unseen images present as well as familiar favourites. Many of these are also unspoilt by wording as so often happens and there are several double page spreads, with Davros and The Master/Doctor image form last of the Timelords being of particular note.

“If The Sarah Jane Adventures had existed when i was eight, and fourth Doctor Tom Baker had come in for an episode, I’d have thought it was the coolest thing on Earth”
David Tennant

And for Sarah Jane fans there are a couple more “wedding pictures” of Elisabeth Sladen and David Tennant in the Tardis as well as the image already seen.

All in all this book comes highly recommended – you won’t be disappointed.

Please note this has sold out, we will leave the information Just in case there is a re run.

This book will not be in the shops – available only through an order form in Radio Times magazine or via their 24-hour order line 0844 543 9822 (calls cost 5p per minute at all times from a BT landline).

On another note the Radio Times have put up a video and pictures of the recent Covers party some of which feature David Tennant. You can see them all Here