The new issue, which features Doctor Who on the cover, has famous fans, TV critics, children and former Doctor Tom Baker give their verdicts on the Capaldi’s Doctor. Contributors include Professor Brian Cox, Marc Almond and Keeley Hawes; plus test your Who knowledge Radio Times’ The Master Quiz and see how you compare next to Russell T Davies.

The Thick of It creator Armando Iannucci says: “The Peter I know is the smart, funny, thoughtful guy – and I think he’s exactly what the Doctor should be. In fact, when David Tennant said he was leaving, I wondered if they’d ask Peter – just a flicker. He seems to have the air of the classic Doctor.”

Former Doctor Tom Baker says: “He’s a wonderful choice to play the Doctor. Instantly one felt: this fellow comes from far far away, he’s strange. An instant frisson. And what’s the word? Yes, got it! Alien, he’s an alien. I salute him.”

Radio Times is available on the Apple Newsstand every Tuesday, for iPad and iPhone, at £1.99 per issue, £6.99 for a monthly subscription or £79.99 for an annual subscription. The digital issue is initially available on Apple devices and will be rolled out across other mobile and tablet platforms thereafter. 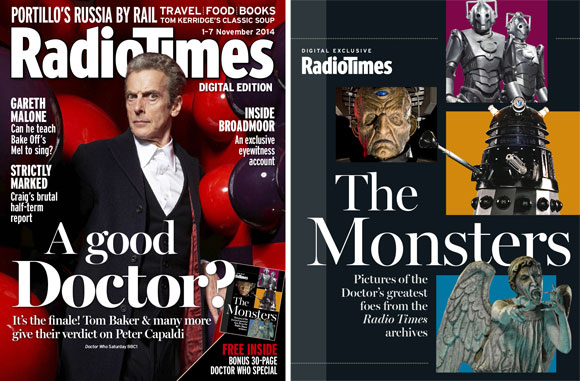