Steven Moffat is Doctor Who’s new “showrunner” – the flashy American term, adopted over here, to describe a visionary writer/producer/TV seer who is charged with the creative evolution of a big series.

So what grand monsters (and tiny terrors) can we look forward to this series? Moffat doesn’t want to give too much away, but the new Doctor, Matt Smith, and his companion Amy Pond (Karen Gillan) are inevitably up against foes old and new, with a star-dusting of special guest-scarers, including Helen McCrory as “a sexy scary vampire-woman and Sophie Okonedo…” here Moffat pauses. As what? “I couldn’t possibly say. But she was in the trailer for the new series, and nobody noticed!”

Steven Moffat: “Can we redesign the Daleks?”

Doctor Who showrunner Steven Moffat tells Radio Times he’s thought about changing the Daleks and even the Tardis, but the fans – and he is one – are safe. 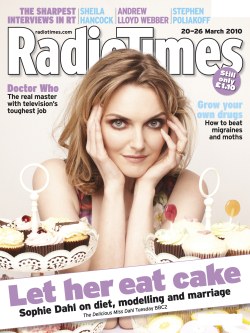 Leave a Reply to the 1st doctor Cancel reply