The Monsters are Coming – Doctor Who Live

THE MONSTERS ARE COMING… DOCTOR WHO LIVE!

THE GALAXY’S FIRST ELEVEN REVEALED IN AN INTERGALATIC LINE UP

BBC Worldwide has today revealed the final 11 monsters that will be taking to the stage and touring the UK as part of the very first production of Doctor Who Live. 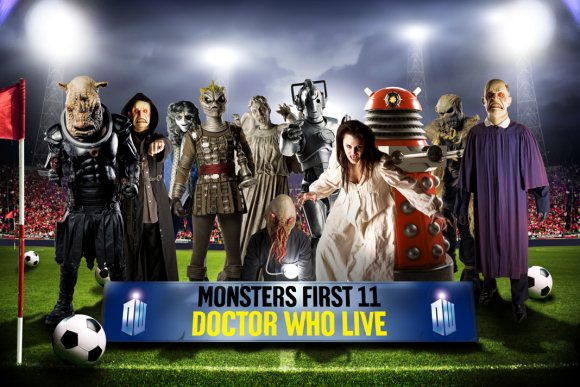 The out-of-this-world lineup includes The Doctors arch-enemies, the Daleks, as well as 10 of the best-loved and most terrifying monsters from the TV series including the Cybermen, Weeping Angels, Judoon, Silurian, Smilers, Winders, Scarecrows, Vampires, Clockwork Droids and Ood.

Taking in nine cities and 25 dates, Doctor Who Live kicks off in London at Wembley Arena on 8th October, and will visit Sheffield, Glasgow, Birmingham, Manchester, Nottingham, Cardiff and Liverpool, culminating in Belfast on the 7th November.

Based upon the BBC’s smash-hit, award-winning series Doctor Who, and developed in association with Doctor Who’s Executive Producer and show runner, Steven Moffat, the new stage show, promises to deliver a spectacular audio/visual experience featuring live music, special effects and appearances from the show’s most popular monsters.

Doctor Who Live promises the same excitement, adventure and suspense that viewers have come to expect from the TV programme and will feature specially filmed new video scenes.

Steven Moffat said: “This is everything I ever wanted since I was eleven. A live show, with all the coolest Doctor Who monsters, a proper story, and brand new screen material for Matt Smith’s Doctor! I’ll be writing scenes for it, and probably attending every single night!”

Opening in wartime London and concluding in an epic onstage battle, audiences should expect the unexpected as the The Doctor’s arch-enemies the Daleks are joined by some of the best-loved and most terrifying monsters from the TV series including the Cybermen, Weeping Angels, Judoon and Oods to name but a few.

Specially edited video clips, drawn from the TV Programme will be shown on a massive screen and accompanied by the music of longtime Doctor Who composer Murray Gold. These iconic scores will be brought to life by a 16 piece orchestra live on stage.

Murray Gold said: “The live element always adds something extra, but these will also be brand new arrangements for a new band of very talented musicians. It’s very exciting.”

Doctor Who Live has been conceived as a fully immersive music and monsters spectacular. Please note that Matt Smith will be appearing on Video Screen.

Tickets are on sale now.

Please note that for Belfast Odyssey Arena, the ticket prices are higher as booking fees and agency commissions are included in the ticket price – this is standard practice for shows in Northern Ireland.