BBC Books are delighted to announce the Doctor Who Encyclopedia iPad app, which has been developed by Brandwidth in partnership with BBC Books. Written by former Doctor Who script editor Gary Russell, the app is the ultimate guide to seven years of thrilling Doctor Who adventures, which includes up to date information on every episode since the show’s return to our screens in 2005.

It allows you to scroll your way through a complete A-Z of the show and explore and search thousands of entries by series or episode. You will discover the Doctor’s fiercest enemies, closest allies and key places and objects and have the opportunity to preview and buy those must-have episodes. 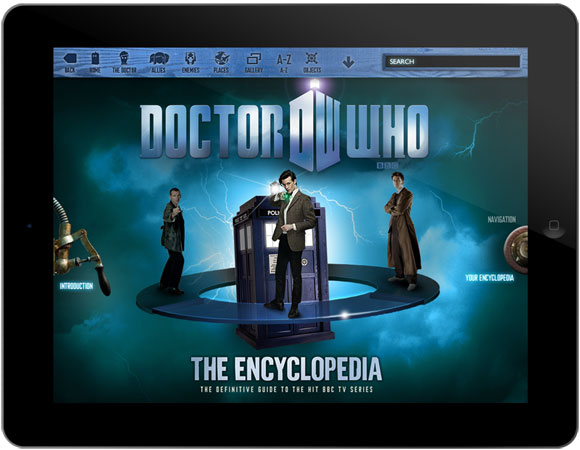 The app contains over 3000 entries and each entry includes links to episodes, people, places and objects that relate to it. Additionally, each entry has an episode reference, allowing you to search the Encyclopedia by episode or series – so you can find out all you ever need to know about the Doctor, his allies, enemies and everywhere he’s ever visited. You can also preview episodes and buy your favourites directly from iTunes. The initial purchase of the app will be priced at £4.99 and will include all of the Eleventh Doctor’s content.

Further downloads at £4.99 each include all Ninth and Tenth Doctor content.
The app also contains 11 unique portals – special interactive entries, for the Doctor, Amy, Rory, River and other major characters. The Doctors’ portal uses parallax technology which allows users to move their iPad to scroll through a 3D environment, featuring the Doctor’s closest companions and deadliest enemies.

The Doctor Who Encyclopedia is an unforgettable tour of time and space. Encyclopedias are cool. 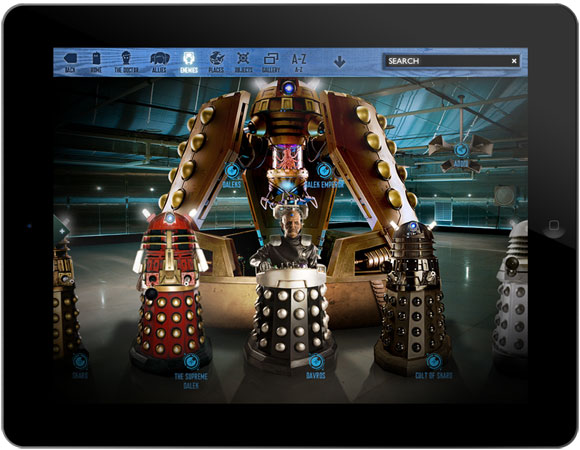 You can find full information at www.doctorwhoencyclopedia.co.uk.

Leave a Reply to King of the weevils Cancel reply