Royals meet Doctor Who and Daleks at BBC studios tour

The Prince of Wales and Duchess of Cornwall are meeting Daleks and some of the cast of Doctor Who on a visit to the set in Cardiff.

The royal couple are visiting BBC Wales’ Roath Lock studios on day three of their annual summer tour of Wales.

They have come face-to-face with two of the Doctor’s most famous adversaries.

On Monday the couple visited the last home of poet Dylan Thomas in Laugharne, Carmarthenshire, and on Tuesday held a series of engagements in north Wales.

On Wednesday morning, they were greeted by BBC Wales director Rhodri Talfan Davies in Cardiff Bay – where Doctor Who is recorded – and then posed for pictures with two gold-coloured daleks. 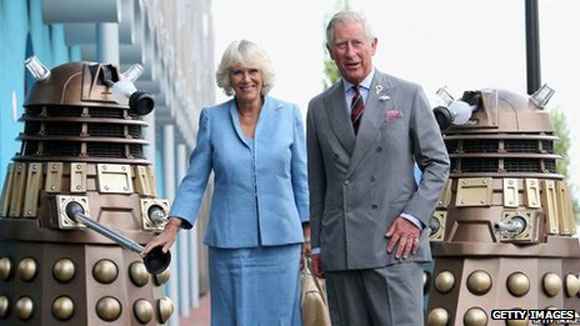 They are due to meet Matt Smith, who currently plays the Doctor but is stepping down, and Jenna Coleman, who plays his companion, as well as series head writer Steven Moffat.

The Prince of Wales and the Duchess of Cornwall at Rhug Chapel, Corwen, Denbighshire The chapel at Rhug, Corwen, was the first stop for the royal couple in north Wales on Tuesday 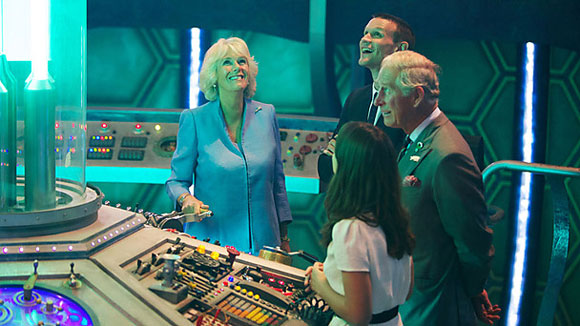 The tour includes the set of the tardis, the Doctor’s time travelling ship, as well as a display of some of the show’s monsters, including a weeping angel and a cyberman.

Nicholas Briggs, who voices the daleks, will demonstrate some of their famous catchphrases, while production staff will show how a green screen set is used to generate some of the programme’s special effects.

Doctor Who is celebrating its 50th anniversary this year.

In addition to Doctor Who, Roath Lock is also home to BBC programmes including Casualty, the Welsh-language drama Pobol y Cwm and children’s drama Wizards vs Aliens.

Later Prince Charles will visit the new headquarters of his charity, Prince’s Trust Cymru where he will meet volunteers, staff and young people.

The Duchess of Cornwall will visit a shop in Porthcawl for the homeless charity Emmaus, of which she is patron.

On a visit to Treharris near Merthyr Tydfil, Prince Charles will go to the Farmers’ Co-operative Shop, and meet staff and local farmers