Like the Tardis materialising from another dimension a giant Dalek has cropped up in a field of maize on the outskirts of York. Is it the work of alien invaders or crop circle pranksters? In fact it is an inspired piece of field art created by Yorkshire farmer and Doctor Who fan Tom Pearcy as his tribute to the 50th anniversary of the show. 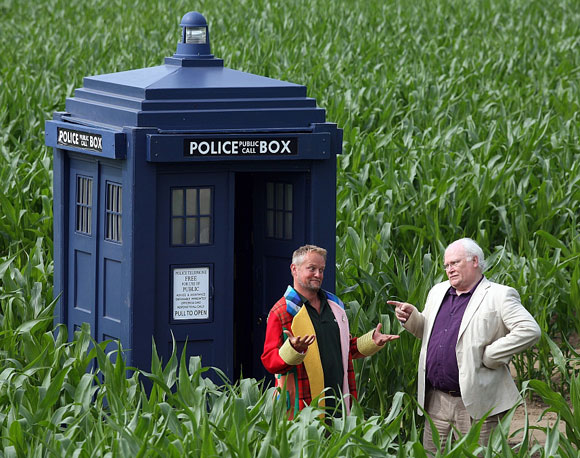 Mr Pearcy’s York Maze design features the biggest image of a Dalek ever created, over 300m (1000ft) long, cut out of an 18 acre field of over one million living maize plants. The design also includes images of the first Doctor in 1963 William Hartnell and the current Doctor 2013’s Matt Smith. The 10km of pathways form an intricate maize maze which visitors can explore. York Maze is the largest maze in Europe and one of the largest in the world.

Says Tom Pearcy, “Like many kids I grew up watching Doctor Who from behind the sofa and fell in love with the show. I wanted to create a piece of art as a tribute to the 50th anniversary and also make it interactive so visitors can have their own adventures in time and space inside the maze.” 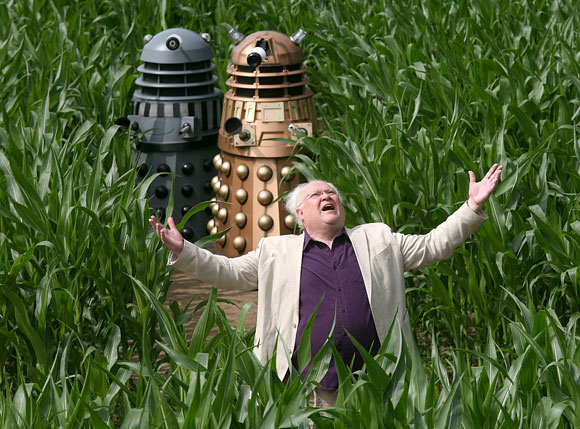 The sixth Doctor, Colin Baker met up with some of his old foes the Daleks at the launch of the York Maze.

Says Colin Baker, “It is fantastic to see how much interest there is in the 50th anniversary of the show. I have been invited to join events all over the world this year, but what York Maze have created with their giant maize maze has to be one of the most imaginative ways to mark the 50th anniversary I have seen. Who would have thought almost thirty years after I played the Doctor that the show would continue to go from strength to strength reaching a new generation of fans. It is great that children and their families will be able to have their own Doctor Who inspired adventures in the York Maze this summer.” York maze is an award winning, seasonal attraction that will give your whole family an “a-mazing” day out. You will have an action packed, fun filled day in the country, exploring your way round their giant maze and enjoying over 20 exciting rides, shows and attractions.

Set in the beautiful Yorkshire countryside, yet only 10 minutes from the centre of York, it’s a great day out you don’t want to miss!!

York Maze opens to the public on Saturday 13 July. 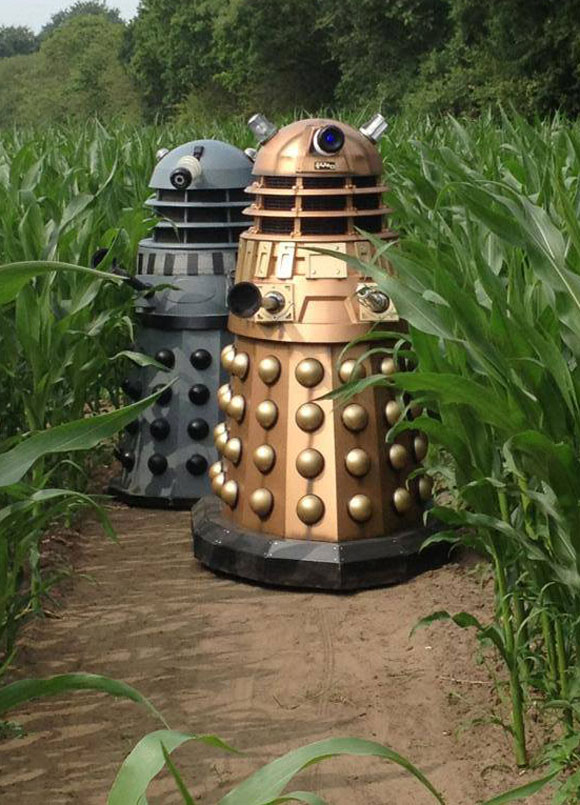 Saturday 27 July: Sci-Fi Day
Come face to face with the Daleks, peer inside the Tardis (is it relay bigger on the inside) and other fun Doctor Who and Sci Fi activities. Prizes for the best costume.

Thursday 1 August: Yorkshire Day
Celebrate all that is great in Yorkshire. Enter the round Straw Bale rolling race and the Yorkshire pud throwing contest – ay up!!

Saturday 3 August: World Sweetcorn eating championships & Festival
A day of events to celebrate the wonderful plants the maze is made from with live music and sweetcorn BBQ. Watch the excitement of the World Sweetcorn Eating Championships, or join in yourself. Could you be the one to set a new record and walk away with a cash prize!

Saturday 10 August – Fundraising Day
York Maze will be teaming up with local charities. Join the fun with stalls and activities that will raise some much needed cash, while you have fun!

Saturday 17 August: Beach party & barbeque
Chill out at the York Maze beach party with a surf simulator, limbo dancing, music and barbeque. Cool off in “water wars” where everyone can get a soaking!

Sunday 1 September: Dog Day
Displays of dog agility, from the Ebor Dog Club. Bring your dog and give it a try!

Saturday 26 October: UK Giant Pumpkin competition
The biggest cash prize in UK pumpkin crowing, £2000 for anyone who can set a new UK record, £500 for the biggest pumpkin on the day, plus children’s competition.