Barry Letts, producer of Doctor Who through one of its most fondly-remembered periods with Jon Pertwee as the Third Doctor from 1970 to 1974, has died at the age of eighty-four.

Full story on the Doctor Who News page

Barry Letts Who & Me Autobiography 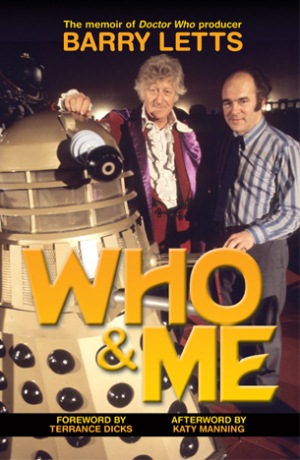 Barry Letts began his screen career as an actor, starring in the Ealing film Scott of the Antarctic and TV dramas such as The Avengers, The Moonstone and Gunpowder Guy in which future Doctor Who actor Patrick Troughton took the lead role. In the 1960s he switched to directing, taking the helm of classic shows such as The Newcomers and Z Cars.

Barry got his first taste of Doctor Who in 1967 when he directed the six-part serial The Enemy of the World. In 1969, he took over as the show’s producer. This was an exciting time for Doctor Who – the show had a new lead actor, and was being broadcast in colour for the first time.

Barry reveals his memories of this era, talking about his relationship with script editor Terrance Dicks and the show’s cast, Jon Pertwee, Katy Manning and Roger Delgado.

Behind-the-scenes gossip, fascinating production detail and witty anecdotes, Who and Me recounts Barry Letts’ journey from struggling actor to successful producer, and the ups and downs of working on Doctor Who during the Jon Pertwee years