BBC Worldwide and Prince Charles Cinema announce marathon screening of Doctor Who: The Enemy of the World and The Web of Fear in association with BFI
Tickets on sale 14 February 2014 from www.princecharlescinema.com

To celebrate the release of the classic Doctor Who story The Web of Fear on DVD on Monday 24th February, BBC Worldwide is delighted to announce a marathon screening (12 x 25’) of Doctor Who: The Enemy of the World and Doctor Who: The Web of Fear at the Prince Charles Cinema in London on Saturday, 22nd February 2014. Tickets go on sale from www.princecharlescinema.com at 9am on Friday 14th February and are priced at just £14#.

The screening will be followed by a 45 minute Q&A session with key cast members from the episodes as well as a member of the Troughton family. The panel will be chaired by writer, actor and Doctor Who fan Toby Hadoke. The marathon will begin at 11.15am.

Nine of the episodes from these classic stories were missing and feared lost forever before they were returned to the BBC# by television archive expert Philip Morris in 2013 after he located them in a relay station in Jos, Nigeria, just before the world’s longest running sci-fi drama celebrated its 50th anniversary.

Their recovery was celebrated by Doctor Who fans worldwide and also captured the imagination of the world’s media. They have since been restored by the Doctor Who Restoration Team and were made available for download in October 2013 by BBC Worldwide. The Enemy of the World has subsequently been released on DVD, while The Web of Fear will be released on Monday 24th February.

Fiona Eastwood, Director of Consumer Products at BBC Worldwide says, “The recovery of these missing stories was undoubtedly a high point for BBC Worldwide and Doctor Who fans around the world last year, and we hope there will be more to come. We’re delighted that we’ve been able to make both of these stories available and the marathon screening at the Prince Charles Cinema is a great moment for Doctor Who fans to come together and celebrate their recovery.”

Paul Vickery, Head Programmer at the Prince Charles Cinema says, “I couldn’t be more proud to be part of this one-off experience – as a cinema, it’s a dream come true for us to finally have the Doctor fill our screen and delight audiences and fans of the show. As a HUGE fan of the series I’ll be there too, front row-centre. I’m very excited about having the opportunity to revisit these incredible episodes in a truly unique way… on the big-screen.  It’s sure to be one of those events for the PCC history books and I for one can’t wait.”

Dick Fiddy, Missing Believed Wiped Co-ordinator at the BFI says, “These finds are truly significant, offering a further opportunity to re-visit the Patrick Troughton era. The recovery of these episodes indicates the possibility that more episodes are out there somewhere awaiting re-discovery – a mouth-watering prospect for all Doctor Who fans and those interested generally in the recovery of missing UK television programmes.”

Both stories are from the fifth season of Doctor Who (Patrick Troughton’s second full season as the Doctor) and originally aired on the BBC in the winter of 1967/8. The Enemy of the World sees the Doctor and his companions caught in confusion due to the Doctor’s uncanny resemblance to a man bent on seizing control of the world – Salamander. The Web of Fear follows on directly from the conclusion of The Enemy of the World as the TARDIS narrowly avoids becoming tangled in a web-like substance in space before landing in the London Underground. The Doctor soon discovers something strange is afoot as the web and an army of robotic Yeti controlled by the Great Intelligence threaten to overrun the system. The story is also famed for the first appearance of Colonel Lethbridge-Stewart, later to become the legendary Brigadier.

Unseen in the UK for 45 years – marvellously restored and remastered and brought back to life for you to own on DVD.

Enemy of the World is the fourth tale of Series 5 which first aired on the BBC in December 1967. It stars the second actor to play the Time Lord, Patrick Troughton, who is both the Doctor and his antagonist Ramon Salamander, alongside Frazer Hines (Jamie) and Deborah Watling (Victoria).

On Earth in the near future, the Doctor and his companions are enmeshed in a deadly web of intrigue thanks to his uncanny resemblance to would-be 21st century dictator Salamander. He is hailed as the ‘Shopkeeper of the World’ for his efforts to relieve global famine, but why do his rivals keep disappearing? How can he predict so many natural disasters? The Doctor must expose Salamander’s schemes before he takes over the World. 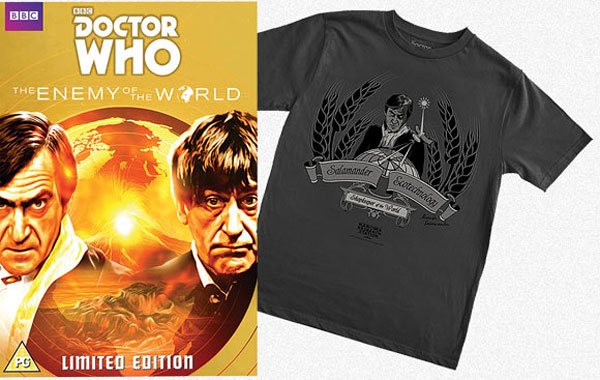 Considered missing but astonishingly found by Phillip Morris in Nigeria, Africa by the tracking records of overseas shipments made by the BBC containing tapes for transmission. On his discovery Phillip Morris says, “The tapes had been left gathering dust in a store room at a television relay station in Nigeria. I remember wiping the dust off the masking tape on the canisters and my heart missed a beat as I saw the words ‘Doctor Who’. When I read the story code I realised I’d found something pretty special.”

Available to order exclusively from www.bbcshop.com

Now updated with a BBC Shop exclusive slipcase cover to match the style of Doctor Who: Enemy of the World Exclusive DVD.

The second serial in the infamous “missing episodes”, recovered from far flung TV out-posts and lovingly remastered and pressed to disc for you to collect and keep, Web of Fear sees the second Doctor (Patrick Troughton) meet Colonel Lethbridge-Stewart, who goes on to be known as the Brigadier, for the first time. 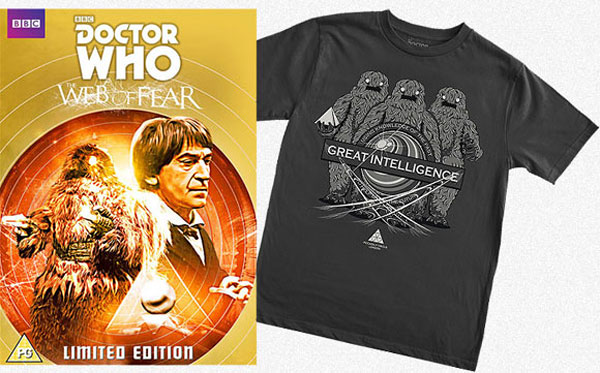 Featuring robot Yeti, London Underground, The Great Intelligence and of course companions Jamie (Frazer Hines) and Victoria (Deborah Watling), this recovered story arc was deemed so scary that it was preceded by the following message, delivered by the Doctor sitting in one of the London Underground sets and saying:

‘Thank goodness… Oh, it’s you… I thought for one moment it was… I’ll just sit down for a minute.
I’m glad I met you as a matter of fact; there’s something I want to tell you.
‘When we start out on our next adventure – Jamie, Victoria and I – we meet some old friends.
Yes, and we also meet some old enemies. Very old enemies.
The Yeti as a matter of fact. Only this time they’re just a little bit more frightening than last time.
So I’ll warn you that if your Mummy or Daddy are scared, you just get them to hold your hand.
[sound of gunfire]
‘Here we go again. I’ve got to go. See you soon – I hope!’

So you have been warned – sofas may be required for hiding behind and hands may get a little squeezed. Secure your copy of this lost classic today.

Available to order exclusively from www.bbcshop.com