King of RomComs, Richard Curtis writes for Doctor Who

It is, according to Richard Curtis, the Hamlet of the television world. A pivotal, career-making role, to be reprised over the years with different actors, always the same, and yet metamorphosing radically with each new incarnation.

We are, of course, talking Doctor Who – and how Curtis, that nice chap who made Hugh Grant into a superstar and Bill Nighy into a pin-up, who made us hoot at Four Weddings and a Funeral in the cinema and Blackadder on the telly, has at last been corralled into Camp DW.

Not that Curtis, 53, was a childhood addict. “No, I wasn’t very dedicated. I seem to remember I liked the Master more than the Doctor, strangely enough.” He says his decision to write an episode was more thanks to the nagging from his four children, now aged from 14 to six. “My kids absolutely love it. We all watched the Christmas special two years ago and my children said I had to do one. Scarlett, our eldest, pointed out that while I’d always promised I would write a children’s movie, by the time I do, she won’t be a child any more. And the great thing about telly is how swift it is by comparison with films.”

While the “Curtis Episode” stars the new Time Lord, Matt Smith, it uses a storyline about Vincent van Gogh that had been in Curtis’s head for a long time. So, the Tardis journeys into The Starry Night. That’s a bit high-end, isn’t it? It’s certainly a long way from the common-as-yuk territory of blood-curdling vampires or nasty underground aliens (to cite just two of the Doctor’s recent experiences). Not at all, says Curtis. In his view, Van Gogh is easily as familiar as an alien or a vampire.

For the full interview see this week’s Radio Times, on sale from today 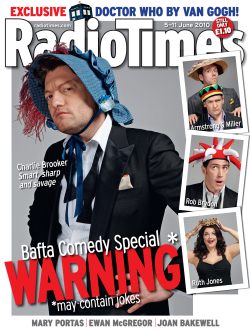