David Tennant has nothing to say to Matt Smith

David Tennant has admitted he has “nothing to say” to new Time Lord, Matt Smith.

Tennant told Reader’s Digest, in an exclusive interview for the December issue, that he’d spoken to his successor several times “but there’s nothing to say. I think we both thought we’d be able to exchange lots of ideas. But actually it’s none of my business how Matt does it and nothing I say can really help him.”

Talking about his final foray as the Doctor in this year’s Christmas special, Tennant says “This year we’ve done something different. It is still set in Christmas, but it’s perhaps not got quite as much, er…Christmas cheer as before.” Tennant adds that come Christmas Day he’ll be watching his own send off. “Just to enjoy the moment. It’s my last Doctor Who – it will be nice to witness that.” 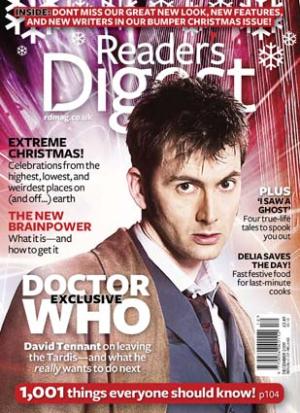 Tennant is now the proud possessor of his own sonic screwdriver, the Doctor’s signature gizmo. “I have one of the real things! I’ve only once used it to impress a child. It was a charity thing but it was quite cool. He was only about five, so it was a nice, wide-eyed moment.”

While he “doesn’t have any regrets” about leaving the iconic series Tennant is prepared for the inevitable “pangs of jealousy” once he’s handed over the Doctor’s mantle.

But Tennant fans shouldn’t think he’ll be resting on his laurels.

Hinting at possible future plans, Tennant reveals that as a child he loved Marvel’s The Avenger’s, a comic about a team of crime-fighting superheroes. “It’s yet to be made into a film, although I think there are rumblings. I’d be quite happy to be involved.” Indeed the film is in pre-production, with Robert Downey Jr. and Scarlett Johansson already signed on.

The full piece will feature in the December issue of Reader’s Digest on newsstands on 26 November.