BBC Worldwide is delighted to announce details of the official Doctor Who Festival, which will take place at ExCeL, London, on the 13th, 14th and 15th November 2015. The Doctor Who Festival will be attended by the current Doctor, played by Peter Capaldi, and series show runner Steven Moffat. The Festival will offer fans an exclusive glimpse into how the inimitable world of Doctor Who is created.

Get inside the adventure; find out how to develop the latest hide-behind-the-sofa monster and explore the series 8 & 9 Doctor Who sets and props! Fans of all ages will be able to discover the inspiration behind the Doctor’s recent adversaries, the imagination required to create whole new worlds and the ingenuity that goes into designing and making the beautiful backdrops that give Doctor Who its unique look.

Visitors will be given access to the Festival which will include an exciting array of backstage areas including theatre shows where they can come up close and personal with key talent, Interactive Workshops where you can learn the television production process as well as the ultimate Doctor Who shopping village for the collectors merchandise and photo opportunities. This Festival is a must-attend event for die-hard Doctor Who fans, with many, many more exciting announcements to come! 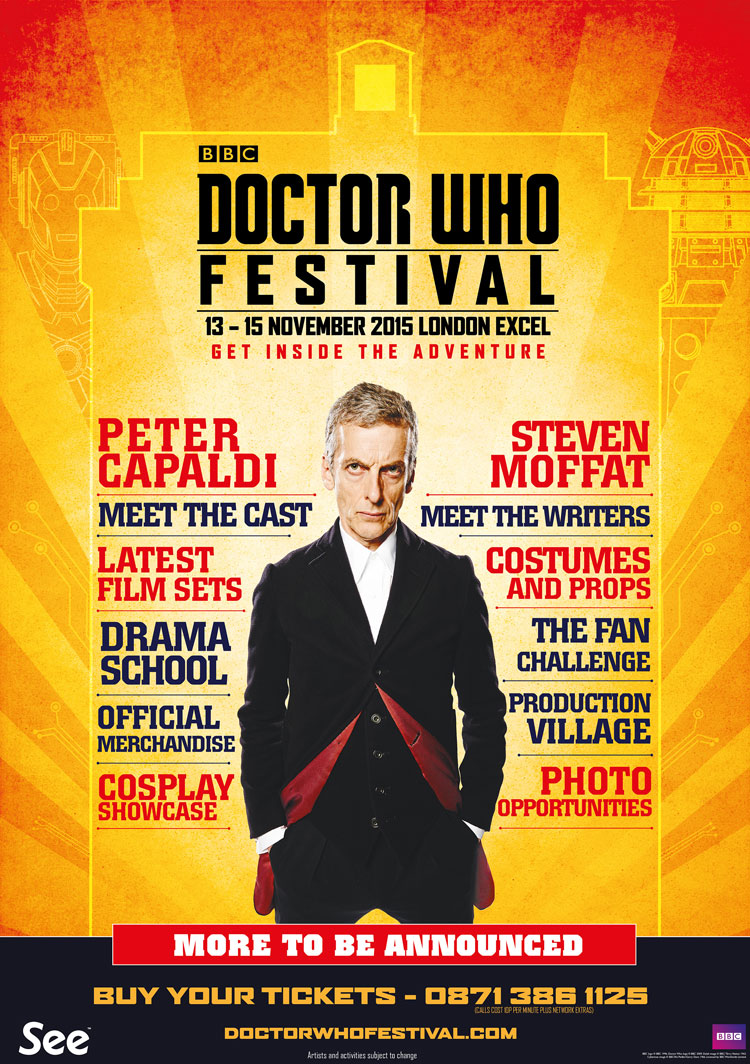 Peter Capaldi says, “If having the world’s favourite Time Lord back on screen every week isn’t enough for you (and it’s not for me) then The Doctor Who Festival in London is the place to be. I’ll be heading there in November to join the fun and if it’s anything like the 50th anniversary event, then prepare yourself for total Time Lord mania.”

Steven Moffat added, “I can’t believe we’re going to give away our secrets! This is the closest you could possibly get to finding out what happens on set and how this magical show is put together.”

THEATRE SHOWS – exclusive access to the writers and cast from the series as they talk about how to make an idea become reality on a series as big and bold as Doctor Who.

ON SET PHOTO–photo opportunities on one of the current filming sets.

WARDROBE DEPARTMENT – an exhibition of costumes and props from the series.

THE FAN CHALLENGE! –Fans young and old can battle it out in the ultimate test of Doctor Who knowledge in order to be crowned the ultimate fan.

DRAMA SCHOOL – the techniques and secrets that the cast learn when filming Doctor Who.

PRODUCTION VILLAGE – a chance for fans to explore a day in the life of the production team and crew.

PHOTO OPPORTUNITIES – an opportunity for fans to purchase an individual photograph with the current cast members appearing.

The ticket price includes day entry to the Festival, access to three theatre shows, lanyard, floor planner and all of the above. TARDIS tickets to include the above plus brochure, lounge access, front block theatre show seats and a Doctor Who goody bag! Tickets, further information and monthly newsletters are available from www.doctorwhofestival.com