Doctor Who In Comics Exhibition

Doctor Who is the world’s longest‐running comic character based on a TV programme. He is a uniquely British superhero by turns eccentric, wise, often kind, sometimes dangerous, but ultimately mysterious. This exhibition of over 100 works is the first to showcase the Doctor in his many incarnations and shows how the character has evolved in comics over the last 47 years. The museum hopes that during the exhibition the public will help solve the mystery of who created a number of early comic pages including iconic images of the Daleks and Davros.

The show includes all eleven Doctors – plus his early film incarnation played by Peter Cushing. Doctor Who in Comics is of course intimately connected to the TV programme, but the comic stories have also taken fans on imaginative and far‐flung adventures which would have been way beyond the budget and special effects capacity of the BBC. The Doctor has been appearing in comics for 47 years and has been drawn by many great comic artists including Frank Bellamy, Martin Geraghty, Dave Gibbons, Dave Lloyd, John Ridgway and Lee Sullivan. Between 1989 and 2005, when the programme was off the air, apart from a one‐off TV film in 1996, the Doctor lived on in comics, the only place where fans could continue to see their hero in new adventures.

Doctor Who: The Usual Suspects Revisited,Specially produced for Doctor Who in Comics Exhibition 2011 © Lee Sullivan… 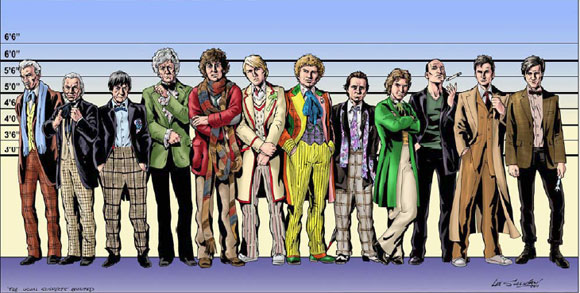 Doctor Who first appeared on BBC television on 23 November 1963. The programme rapidly attracted a following – particularly with the appearance of the Daleks in the second story. What is less well known is that on 14 November 1964 the Doctor featured in his own strip in TV Comic and he has continued to appear in comics in every year since. In 1979 he finally got his own title with the arrival of Doctor Who Weekly. Its descendent Doctor Who Magazine continues to this day and is the biggest selling SF magazine in the UK.

In his comic life the Doctor was sometimes ahead of his time. In 1980 he was accompanied by his first black companion Sharon – 25 years before Mickey or Martha Jones appeared on screen. Favourite villains such as the Daleks, the Cybermen, and the Master make several appearances and many important characters such as Sarah Jane Smith, K‐9, Brigadier Lethbridge‐Stewart, Rose Tyler, Mickey Smith, Martha Jones and Amy Pond all feature. It also includes the original illustrations from the 2006 story which went on to inspire the famous TV episode ‘Blink’, and artwork from the only story to be written by a ‘Doctor’ – The Age of Chaos by the Sixth Doctor, Colin Baker.

The exhibition includes stories from TV Comic, TV Century 21, Doctor Who Weekly, Doctor Who Monthly, Doctor Who Magazine, Doctor Who Adventures and the American Doctor Who magazine. It has something for fans of Doctor Who of all ages, showing how a story evolves from script to finished page. The museum is also running special Doctor Who themed workshops for kids over the summer.