On the cover: Doctor Who Special (BBC One)

Peter Capaldi on why he thought he was too old to be the Doctor, bringing the mystery and strangeness back to Doctor Who and how he’s been taking advice from his predecessors (Doctor Who, BBC One)

On being unveiled as the new Doctor in August last year:

“There was a lot of cloak-and-dagger stuff on the way to the studio; the BBC genuinely felt it had to maintain secrecy so I was taken to a car park, dropped off by one car and put in another car with a blanket over my head.”

Too old to be the Doctor:

“I never thought I would be in the frame for it because the Doctors were getting younger and younger and that was fine.”

“It’s nice to talk to people who know what it’s like to get back to your flat at 7.30 at night and still have five pages of dialogue to learn for the next day and the hours are ticking away, and you’ve still got to get some sleep. ”

Peter Capaldi explains he still hasn’t quite found his feet yet:

“I don’t know if it’s quite fallen into place yet. I think it’s a mistake to get it to click, to get into a groove.”

Features inside the new issue include an exclusive interview and cover shoot with star Peter Capaldi and showrunner Steven Moffat’s unmissable guide to all 12 episodes of the new series. This week’s issue is also a Blippar special with additional Doctor Who content where you see the Blippar logo.

Read the full interviews in this week copy of www.radiotimes.com 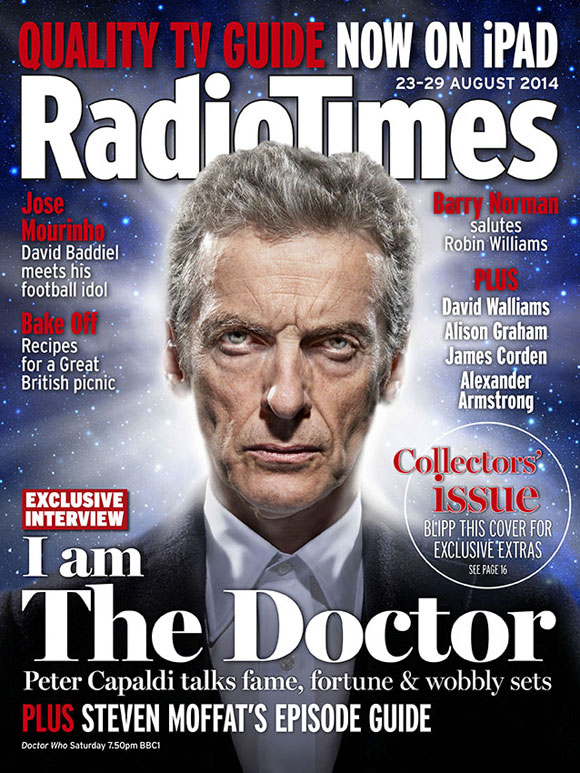 The new digital issue Radio Times, available iOS on Apple’s Newsstand , celebrates the dawn of a new Doctor with exclusive additional Doctor Who content, including a digital reproduction of the Doctor Who 10th Anniversary Radio Times special. The 68 page supplement was first published in 1973 and inspired the then 15 year old future Doctor, Peter Capaldi, to write to Radio Times in praise of the special edition.

The 10th anniversary supplement features the third Doctor Jon Pertwee on the cover and includes episode guides for the first 10 years, a guide to build your own Dalek and a (then) new Dalek story by Terry Nation.

The Radio Times digital special also features a unique animated Doctor Who cover, only available with the digital edition, featuring Peter Capaldi; plus a picture gallery of the new Doctor from an Radio Times exclusive photo-shoot.

Features inside the new issue include an exclusive interview and cover shoot with star Peter Capaldi; showrunner Steven Moffat’s unmissable guide to all 12 episodes of the new series; an exclusive interview with José Mourinho by comedian and author David Baddiel; David Walliams; James Corden; plus comprehensive TV and radio listings for 23-29 August.

*Photo galleries, including exclusive behind the scenes videos from photo-shoots and interviews

*Pinch and zoom TV & radio listings for ease of use

*Comprehensive TV and radio listings, including BBC local radio, with handy links so you can jump to your desired day of the week.

This week’s Radio Times digital issue is available at special summer half-price promotional rate of just 99p. Radio Times is available on the Apple Newsstand every Tuesday, for iPad and iPhone, at £1.99 per issue, £6.99 for a monthly subscription or £79.99 for an annual subscription. The digital issue is initially available on Apple devices and will be rolled out across other mobile and tablet platforms thereafter. 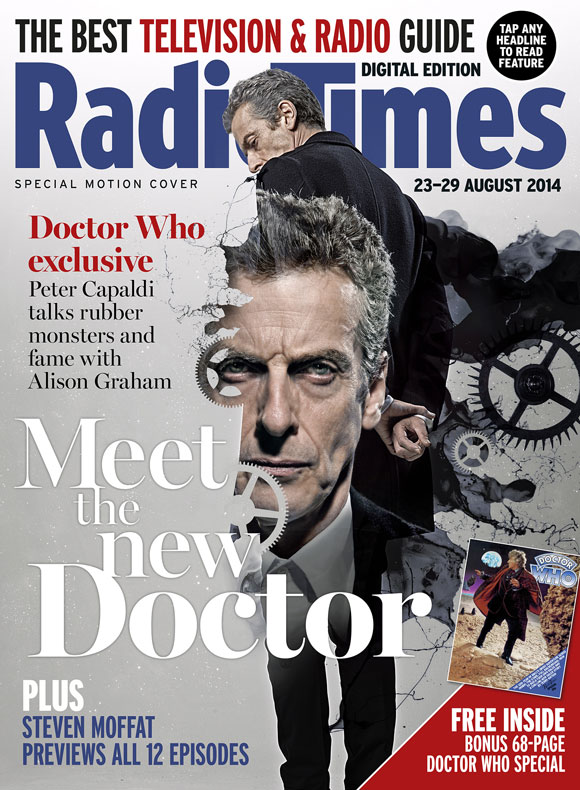