Following Jodie Whittaker’s successful debut as the new Doctor and ahead of Comic Con 2018, BBC Studios and Escape Hunt today exclusively reveal the official name of the forthcoming Doctor Who – The Live Escape Game, which will be called Worlds Collide.

To celebrate the news, visitors to London’s Comic Con will be able to test themselves against the clock with a world first taster experience of the new game on the official BBC Studios stand from 26th to 28th October at ExCeL London. The ‘Worlds Collide Escape Cube’ is designed as a fun prequel to the escape room game launching later this year.

Furthermore, fans can also enter an Escape Hunt competition to become one of the first in the UK to experience the full game at their nearest venue with up to five friends. To enter, fans must simply like a picture of the ‘Worlds Collide Escape Cube’ taster experience at Comic Con on Escape Hunt UK’s Facebook page (T&Cs apply).

Richard Harpham, CEO Escape Hunt PLC, says: “At Escape Hunt, we’re incredibly excited to be working with BBC Studios to create Doctor Who – The Live Escape Game. Comic Con is one of the biggest events in the Doctor Who calendar and with the series having such a dedicated fan base from all over the UK, being able to give these fans the first taster experience of Worlds Collide is a huge opportunity. We just hope they have as much fun trying to crack it as we’ve had creating it.”

Doctor Who – The Live Escape Game will open in Escape Hunt venues around the country from early 2019. Please go to www.escapehunt.com for further information and to register for news about tickets.

To enter the prize draw for the chance to win a free game in the Worlds Collide room, participants must simply like a picture of the ‘Worlds Collide Escape Cube’ at Comic Con on the Escape Hunt UK Facebook page between the 26th October and 5th November. The winner will be notified on the 6th November. For full T&Cs visit www.escapehunt.com

Comic Con is hosted at ExCeL London at the Royal Victoria Dock between 26th and 28th October. 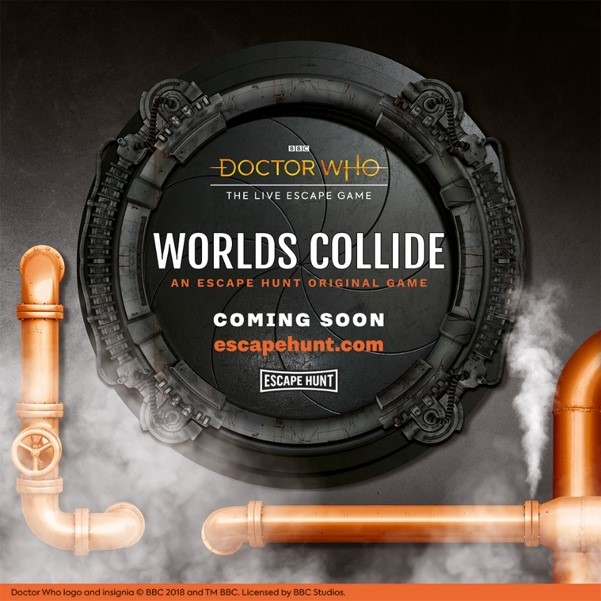