As Doctor Who returns with a new team and a new look this Easter, we eagerly stepped on board the TARDIS for Matt Smith’s first ever interview with the gay press. And in 47 years of the show, he is the first Doctor to ever hold the cover spot of a gay magazine.

We also have unprecedented coverage of the new series, with exclusive content including the first ever interview with the latest addition to the cast, Arthur Darvill. We speak with the Doctor’s assistant Karen Gillan, head writer Steven Moffat, executive producer Piers Wenger and a selection of other characters and creatives, both returning and new. 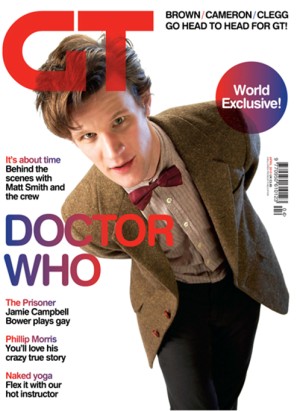 Matt Smith on his new role as the Doctor:

“What’s gorgeous about it is that I get to sort of confess to my imagination every day. So I get to play around in a mad, imaginary world every day, which is limitless and timeless, and endless and boundless. You know, that is as close as you get to sort of magic really, I suppose, in many ways.”

On being described by executive producer Steven Moffat as “Patrick Moore in the body of an underwear model”:

“The thing is, right, I’ll take Patrick Moore, fine. But I definitely haven’t got an underwear model’s body, no way, not on this schedule. All my gym’s gone out the window. God no, I take that as a gross over-compliment to be honest. And also! When the hell has Steven Moffat seen me in my pants alone?”

GT is on sale through all major high street brands and supermarkets and is distributed in the UK and overseas by Conde Nast and National Magazine Distributors Limited.

Thanks to Stu Hurford