Discover what it takes to be a ‘superfan’

Doctor Who’s universal reach and popularity will be on show in abundance at the National Media Museum after hundreds of personal objects were offered by members of the public for the upcoming exhibition celebrating the fans of the programme.

Doctor Who and Me: 50 Years of Doctor Who Fans (23 November 2013 – 9 February 2014) explores what it means to be a devotee of the show in its 50th anniversary year, bringing together items that fans and superfans around the world have collected, created, drawn, assembled and purchased over the last half century.

In July the Museum made a public plea for items and stories for the exhibition, resulting in hundreds of offers including knitted Daleks from Indiana; commemorative coins from New Zealand; mum-made Doctor Who scarves from Tunbridge Wells; TARDIS telephones from Burnley and Whovian Peruvians (woolly hats with Daleks on them) from Huddersfield. 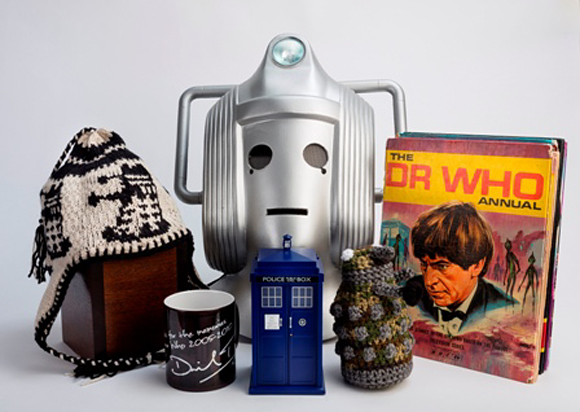 Exhibition curator Toni Booth said: “Over the past few weeks it has become very apparent that the influence of The Doctor extends into many parts of people’s lives – I have heard about marriage proposals at a Doctor Who exhibition in Blackpool and another fan confessing to me that in life, ‘I often ask myself: WWTDD?’ (What would The Doctor do?). The stories and objects in the exhibition will show just how intertwined into their every day lives the Doctor has become for so many people.”

In addition to a vast array of objects loaned from the public, the exhibition includes fans’ own stories and experiences relating just how much they love Doctor Who and why, how they have organised themselves, produced fanzines, attended conventions around the world, and now make use of the internet and social media to discuss the programme.

Doctor Who and Me: 50 Years of Doctor Who Fans also shines a spotlight on a small group known as ‘superfans’; people for whom time, money (and often living space) is of no concern when it comes to demonstrating how much the programme means to them. Toni added: “We have visited a number of superfans at home and they have simply incredible collections of Doctor Who-related objects. We hope to give a real insight into this ultra-dedicated few, as well as display the objects that mean the most to them from the hundreds of items they have amassed.”

The Museum would like to thank everyone who has responded to its request for objects, highlighting the delight and comfort that people get from Doctor Who. The Doctor has been there for them for 50 years and looks like he’ll be around for quite some time yet.

In addition to the exhibition, a Doctor Who extravaganza is taking place at the National Media Museum during October half-term. Families will be able to make a light-up TARDIS and a motorised Dalek to take home, watch Doctor Who episodes from the past 50 years and see behind-the-scenes footage from the programme. Most activities are free, but there will be a small charge for some events and workshops.

Light up the TARDIS
Light up the Doctor’s TARDIS by making a simple circuit, LED lights and a battery in this fun and hands-on activity that you can take home. £1 charge.

Motorised Daleks
Build a Dalek and watch it move around!  Using small motors and a power source you will be able to make your Dalek roam around the room. £1 charge.

With thanks to the BBC and BBC Worldwide for their assistance with October half-term events.