June Whitfield appeared on breakfast TV an although she said very little about her role in The End of time they showed another clip form the Christmas special.Again if you don’t want this spoiled don’t watch!…

The BBC’s Welsh “drama village” could be built in Cardiff Bay’s Roath Basin.

Proposals for the complex have emerged in a planning application submitted for the area.

The planning application seeks permission for a 300m long, 20,000 square metre building housing studios and offices with a distinctive façade and repeating motifs.

It will also have a gothic-style entrance inspired by some of William Burges’ designs at Cardiff Castle and Castell Coch.

The application to Cardiff Council states that it creates a “highly theatrical character for the building”.

You can read more about the proposals at Wales Online Here

Plans and an image of the proposed façade have gone on display at city hall.

The entrance to the Torchwood Hub, more recently a shrine to Ianto has been flooded, tributes left in memory of Ianto can be seen floating away. 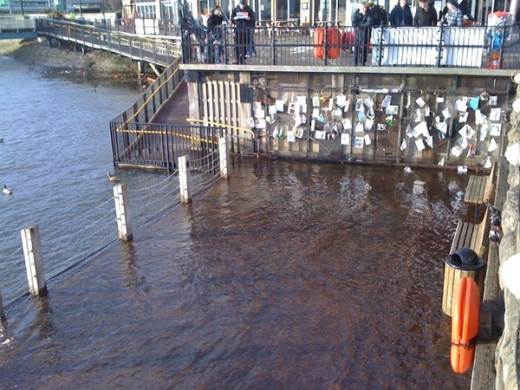 Caerphilly Castle is playing host to a futuristic visitor over the Christmas period.

The blue police box which is located on top of the Inner East Gatehouse tower will be lit up during the night and will stay there until the New Year.

The castle was used to film some scenes for the two part Christmas episode of Doctor Who, entitled The End of Time.

You can read the full BBC news article Here

The Doctor Who story you never got to see…

Why spend thousands of pounds to make an episode of one of the most popular TV series of the time, only to leave it gathering dust in the archive?

Thirty years ago, with only three channels to choose from, Doctor Who and Secret Army on BBC One and The Professionals on ITV routinely delivered audiences bigger than even the most successful programmes do today.

Yet between 1978 and 1979, the producers of all three programmes shelved a story from each.

The explanation has much to do with that period: economic decline, political inertia and industrial unrest creating a combustible combination.

You can read the full BBC article Here