A special one-off standalone episode of Doctor Who will air exclusively on CBBC today, as the winners of the BBC’s Script to Screen competition are revealed.

The new mini-episode marks the return one of the Doctor’s most feared monsters, the Weeping Angels and was created by three talented pupils from Ashdene Primary School in Wilmslow. The Angels made their first appearance in the 2007 episode Blink and will be back in the BBC One series this autumn. 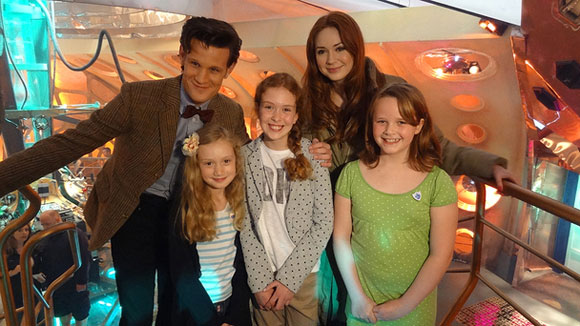 Year 6 teacher, Irene Spawton from Ashdene Primary School said the pupils involved were thrilled and surprised to have won the competition: “It’s unbelievable. I couldn’t believe it when I got the call to say that the children’s script had been chosen as the winner. They worked so hard and came up with some brilliant ideas. I’m so proud of them all and meeting the Doctor and Amy Pond was a fantastic experience for the girls, their parents and me.”

Caroline Skinner praised the quality of the scripts, saying: “We loved reading all of the scripts from schools across the UK and the standard of entries was truly outstanding. It was a difficult, but a tremendously fun task to choose a winner and it was just brilliant to see so many children being creative in developing an adventure for the Doctor. We hope all fans enjoy this special one-off mini episode!”

This is the second time BBC Learning has run the Doctor Who Script to Screen competition, which challenges upper Primary pupils* to develop a short script that takes the Time Lord on a quest travelling through time and space.

Katy Jones, executive producer for BBC Learning, said: “This competition aimed to inspire and capture the imagination of storytellers of the future and we’re thrilled that so many schools have engaged with it. Pupils have described the competition as the highlight of their school year. There was so much real talent displayed in the entries we received and the final film is a real testament to the hard work the school put into their entry.”