Site Menu
Home > Doctor Who News > The Day of the Doctor: TV and Cinema Screenings

The Day of the Doctor: TV and Cinema Screenings

The Day of the Doctor: TV and cinema screenings

Thousands of Doctor Who fans will be able to enjoy the option of seeing the 50th anniversary episode in cinemas around the world.

The Day of the Doctor will be shown in 3D on the big screen, in locations on the map at www.doctorwho.tv. More screens will be added over the coming weeks.

To use the map:

Input your address to discover screenings near you. Clicking on the TARDIS pin representing a screening will give you a link to purchase tickets (if they are currently on sale).

Content of external sites is beyond BBC Worldwide’s control. Location of venues should be used as a guide only. Please check individual cinema billings, as not all screenings will be simultaneous with TV transmission. Tickets may not yet be on sale in your territory.

The 50th Anniversary episode The Day of the Doctor will be screened in 3D in cinemas across the UK, Ireland, the US, Canada, Germany and Russia.

The cinema screenings will take place the same time as the UK TV broadcast on BBC One on 23rd November 2013, giving fans another unique opportunity to be part of a truly global celebration for the iconic British drama series.

216 VUE, Cineworld, Odeon, BFI and Picturehouse cinemas in the UK and Ireland have already confirmed their participation, with tickets for the anniversary screening set to go on sale this Friday October 25th at 9am. Locations include London, Birmingham, Belfast, Dublin, Liverpool, Cardiff and Edinburgh. 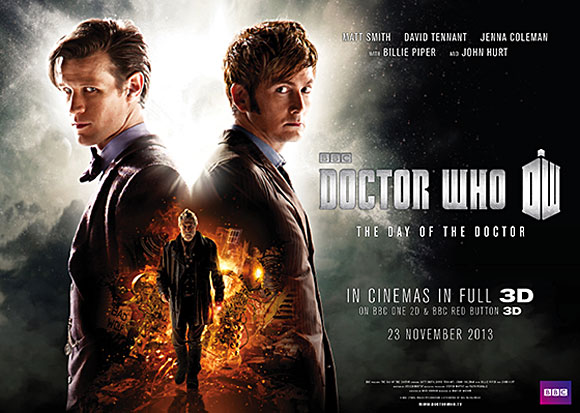