Surprises at Heathrow Airport as The Tardis lands

The TARDIS lands at Heathrow

With thanks to BBC worldwide 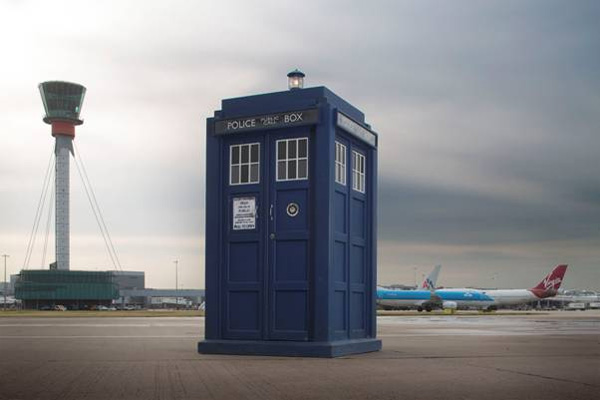 BBC Worldwide has teamed up with Heathrow to celebrate the longest running TV sci-fi series in the world, Doctor Who. From today, passengers travelling through Heathrow will be treated to a variety of exciting Doctor Who themed experiences including: appearances from the famous Cybermen, TARDIS photobooths, genuine props and memorabilia, and augmented reality experiences.

To mark the launch of the partnership, on July 16th travellers through Terminal 5 will be able to enjoy special performances by the London Philharmonic Orchestra of music from the iconic BBC Wales produced series. In addition, Doctor Who novelist Jenny Colgan, author of the recently released Doctor Who: Dark Horizons will also be signing books for fans on the day.

The Heathrow activity comes as BBC Worldwide celebrates Doctor Who internationally ahead of the show’s 50th Anniversary in November. Other recent highlights have included an acclaimed light projection show at the Vivid Festival in Sydney, a sell-out pop up shop and commemorative TARDIS coins in New Zealand. In November, BBC Worldwide will host the only official Doctor Who 50th Celebration at ExCel in London featuring a line-up of special guests. This weekend the cast of the show, including Matt Smith and Jenna Coleman, as well as showrunner Steven Moffat will be attending Comic Con, a huge entertainment convention in San Diego attended by over 130,000 people across four days.

Amanda Hill, Chief Brands Officer for BBC Worldwide comments: “In its 50th Anniversary year we want to include fans around the World in our Doctor Who celebrations and this partnership with Heathrow is a fantastic way of capturing the attention of people from across the globe”.

Susan Goldsmith, Operations Director at Heathrow Terminal 5 said: “I am delighted that Heathrow has been chosen to host this much loved British iconic series. With visitors from over 180 destinations worldwide, as the UK’s only hub airport, Heathrow offers a fantastic opportunity to bring the Doctor Who experience to an international audience this summer.’

Steven Moffat, showrunner, said:
“We are delighted to announce another extension to Heathrow’s world-beating facilities – all of space and time in a stylish blue box, complete with phone. Heathrow with time travel – nobody need ever be late again.”