Social video service Twitch has announced it is joining forces with BBC Studios for the first-ever digital broadcasting event of the Classic Doctor Who series. Over 500 episodes from 26 seasons dating from the show’s inception in 1963 until the 1980s will air worldwide over a seven-week period. Starting May 29, fans can tune in each week Monday to Friday at 11 am PDT to catch episodes on Twitch.tv/TwitchPresents.

Doctor Who is a British action adventure sci fi series produced by BBC Studios which follows the adventures of “The Doctor”, an alien Time Lord from the planet Gallifrey who travels through time in a TARDIS, a spaceship shaped like a police telephone box. Accompanied by a number of friends, the Doctor combats a variety of foes, while working to save civilizations and help those in need. Instead of dying, the Doctor is able to “regenerate” into a new body, taking on a new personality with each regeneration. This has led to 13 different incarnations of the Doctor appearing in the series. 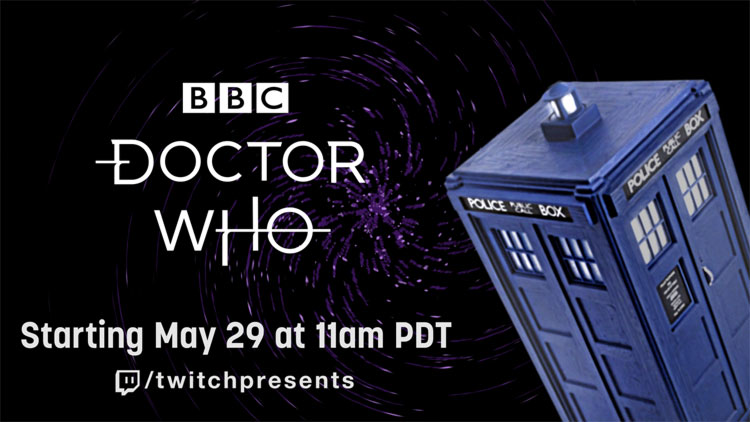 Nick Coulter, Director of Digital Sales and Business Development at BBC Studios says: “We are constantly looking at ways to reach new audiences and make it easier for fans to engage with our most popular shows. Doctor Who, in particular, has a great tradition of pioneering new technologies, from early VHS all the way through to the new digital services of today. Twitch is another great example of this, as a brilliant service with over 15 million active daily users, we are thrilled to be able to offer them the chance to indulge in the Classic Doctor Who series and celebrate its amazing 54 year legacy of excitement and innovation.”

Leveraging the real-time shared viewer experience that has defined Twitch, Doctor Who is the latest entry in over a dozen TV shows that have aired on the service. To elevate the social experience in chat, viewers who Subscribe to the TwitchPresents channel will gain access to 14 exclusive emotes themed after each of the first seven doctors.

For Doctor Who fans in the US, UK, and Canada, Twitch is hosting a giveaway each week of the event, including a grand prize trip to London Comic Con in Fall 2018. For details on the giveaway, visit: watch.twitch.tv

As part of the event, leading UK digital content creators The Yogscast are producing a series of shows that will introduce each Doctor. With a cast of Doctor Who screenwriters, experts, fans,

and even a former companion, the Yogscast’s Turps and resident Doctor Who expert and High Roller’s player Matt Toffollo will be discussing why modern audiences should be watching Doctor Who. Each 20-minute episode will provide a brief summary of the stories that are about to be shown, including the actors, monsters, famous phrases or production gaffes to look out for. With first-hand knowledge from former companion Katy Manning (who played Jo Grant the Third Doctor Companion) and writers Bob Baker and Paul Cornell, the shows will give insight into the series alongside the humor and irreverence viewers expect from the Yogscast.

“Doctor Who and its clever take on sci-fi exemplifies the type of adjacent content to gaming that has resonated with the Twitch community,” said Jane Weedon, Director of Business Development at Twitch. “By presenting this iconic BBC show in a new interactive format, it is a fun new way to bridge several generations of Doctor Who fans, while building a new generation of them.”

For more information on the Doctor Who episodes that will air on Twitch, visit the Twitch blog.